In the Harvest Basket the Week of August 8th... 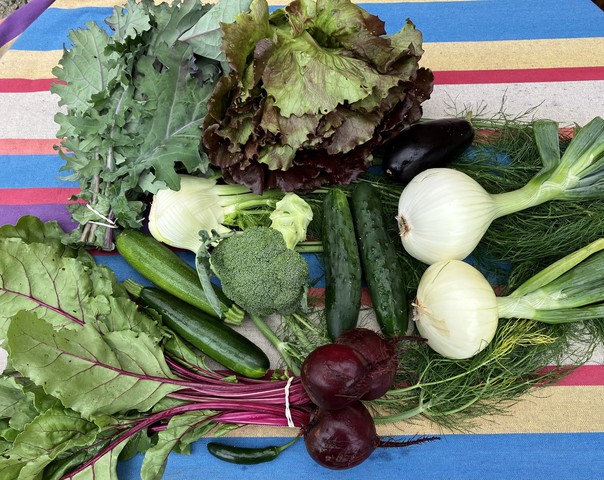 At Last! Flower U-Pick is Open and Summer Solanums are on the Horizon...Someday!

I've decided we need a theme song for this season, so no better pick than Jesse Lawrence's "Better Late then Never." If, like me, you dig soul.

Across the board, our crops are lagging about three weeks behind normal, including our flowers. We were finally able to open up the flower patch to u-pick last Saturday now that the zinnias, sunflowers, rudbeckia, yarrow, strawflowers and nigella are in full bloom. We lost some of our dahlias to rot this very wet spring (wah!), and many of the plants are delayed, but little by little they are rebounding and we're starting to see more color in the beloved dahlia bed. We also have some trial dianthus in the ground this year - old-timey, divinely-scented riffs on carnations in beautiful shades of peach, cream, burgundy, and pink. It's been fun to watch the first blooms slowly crack open their tight, grey-green buds and fill the air with their unbelievable, heady perfume. I anticipate they'll be in peak bloom the next couple of weeks. If you come to pick flowers on a Wednesday or Saturday, swing in at the strawberry u-pick shack to get a pair of clippers and a PVC tube. We sell flowers by the tube: a small tube is $3.50, a large tube is $9. It's always a good idea to bring a bucket to carry your flowers home in so they don't wilt in transit. Also, please be mindful in the flower patch and don't push through the plants to cross to a different row; it snaps the branches off, tips the plants over, breaks stems, and does damage to the flowers. Take it slow and go around, or look for a gap to cross through. Also please don't cross the white rope fence; we have variety trials underway on the far side of our sunflowers and don't want folks trampling through them. Thanks! 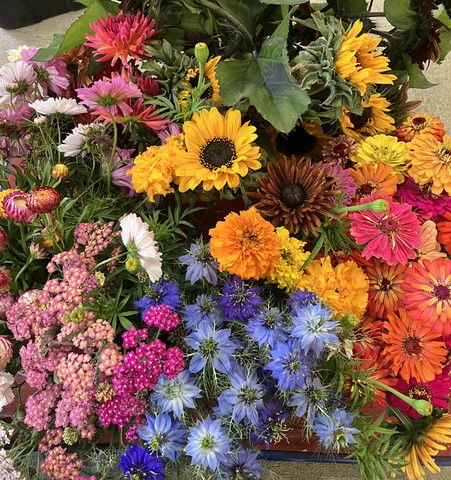 We finally saw our first eggplant harvest this week - a shy offering, given that we would normally be putting eggplant in all the CSA totes by now (along with tomatoes and early peppers). Ironically, in this day and age of scorching heat domes, our coastal weather tends to shift in the opposite direction: greyer, cooler, more days socked in under the marine layer. That, combined with the slow, cold start to the season has put off our heat-loving Solanaceous crops like eggplants, tomatoes, and peppers. The peppers and tomatoes look fantastic and are loaded with unripe fruit, so it might be one of those years where it's all about tomatoes in September instead of August and the avalanche of peppers in October instead of September. Hopefully! Sweet corn, also late, is tasseling so I think we'll have our first pick within the next two weeks. We plant five successions of corn so that we can keep it coming from August through September. Make sure you stock up on butter, cuz the corn rolling is about to begin!

Sweet Corn on the Horizon 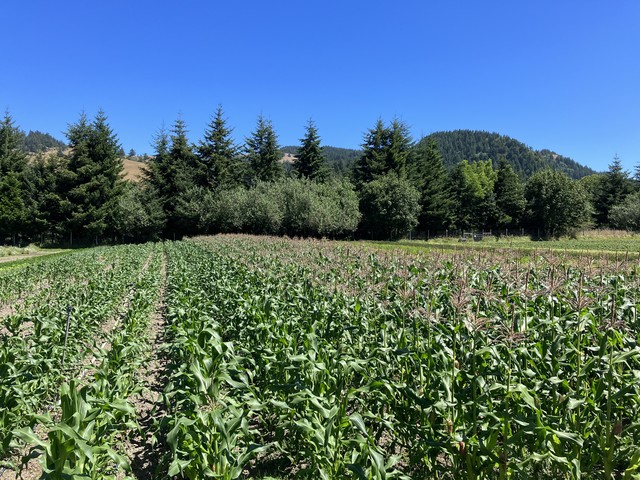 And because all we really do on the farm is horse around, another shot from my favorite perch on the stradderow cultivator: Jack and Lily cultivating the new fall Brassica field, with the intrepid crew in the background tackling our weekly transplanting (look at that form!! - hinged at the hips, strong straight backs, wide-legged power stance, we're talking ATHLETES, not just farmers, people!). Lots of fall and winter cabbage, broccoli, cauliflower, kale, and romanesco going into the ground right now - setting the stage for late season bounty!

Planting - and Cultivating - for Fall 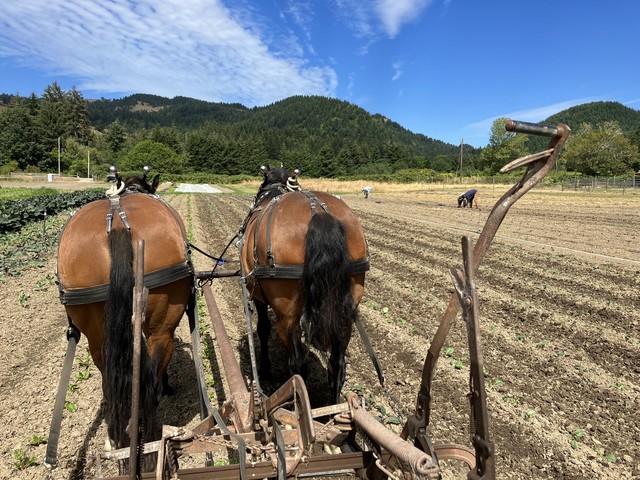